November 22, 1963: JFK does not die. What would happen to his life, his presidency, his country, his world?

Jeff Greenfield presents his most compelling narrative of all about the historical event that has riveted us for fifty years. What if Kennedy were not killed that fateful day? What would the 1964 campaign have looked like? Would changes have been made to the ticket? How would Kennedy, in his second term, have approached Vietnam, civil rights, the Cold War? With Hoover as an enemy, would his indiscreet private life finally have become public? Would his health issues have become so severe as to literally cripple his presidency? And what small turns of fate in the days and years before Dallas might have kept him from ever reaching the White House in the first place?

If you place your order through PayPal, you will receive a signed copy and get FREE shipping. Alternatively, you can purchase this book from other retailers.

If Kennedy Lived: The First and Second Terms of President John F. Kennedy 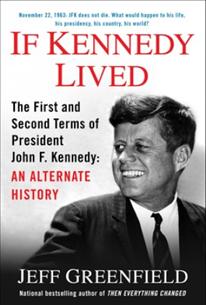